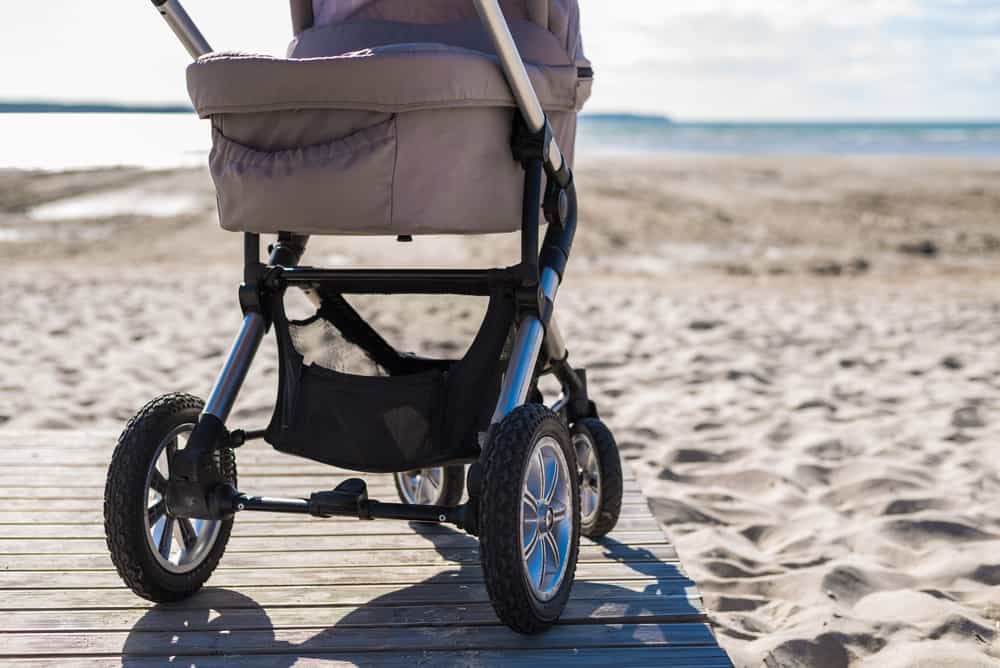 It’s very easy to become confused with all the different brands and styles of strollers that are available in the shops and online. And one of the most perplexing variations to understand is the difference between three-wheel and four-wheel models.

So, we’ve put together this helpful comparison. So, you can figure out whether three or four wheels will fit your lifestyle best. We’ve also included lots of links to our full reviews of some of the different types of strollers you can buy to give you an idea of what’s out there.

What are the advantages of a three-wheel stroller?

Three-wheeled strollers are becoming increasingly popular among parents. That’s not surprising given that three-wheelers have some significant advantages over the more traditional four-wheel design.

A three-wheel stroller typically has two larger wheels at the back for increased stability and to prevent the stroller from tipping over. So, that means that the smaller front wheel is responsible for the stroller’s maneuverability, making steering the vehicle relatively easy. Therefore, if you want a nifty stroller that’s easy to use in tight spaces, a three-wheeler is the way to go.

Generally, three-wheel strollers are easy to push with one hand. Thus, they’re perfect for when you have to carry something or have a wriggling toddler to hang on to! But you should look for a stroller that has a swivel front wheel. If the front wheel is permanently fixed in place, turning the stroller can be pretty tricky.

Ideally, you want a three-wheeler with a swivel front wheel and an optional locking system. That’ll come in handle when you need the stroller to keep on a straight line. For a perfect example of this, check out our review of the Bumbleride Indie.

All three-wheelers are not made equal, and there’s a wide variance in the tire types on three-wheel, all-terrain strollers.

You’ll find some with solid, foam-filled wheels and some with rubber, air-filled tires. So, what’s the difference?

Well, some parents find that strollers with solid wheels give a bumpier ride. They can also be harder to push than those with air-filled tires.

The advantage of foam-filled wheels is that they don’t need pumping up. And you’ll never get a puncture! So, if you intend to use your stroller primarily in town, for trips to shopping malls, or on relatively flat, easy going, you’ll be fine with foam-filled wheels.

However, if you’re planning on taking your stroller to the park, along nature trails, or over rough ground, you’ll be much better with an all-terrain stroller that has air-filled tires. That said, most modern strollers have sophisticated suspension systems. These are designed to iron out any bumps, regardless of the type of tire they have.

Disadvantages of a three-wheel stroller

Of course, like almost everything in life, the three-wheel stroller does have a few disadvantages:

What about four-wheel strollers?

A stroller with four wheels can be a more stable ride than one with just three wheels. If you intend to use the stroller as a travel system, that’s an important consideration.

Three-wheelers with a seat that’s quite low to the ground give good stability. But models with higher seats do have a higher chance of tipping over when the child being carried becomes heavier and bigger. In comparison, four-wheel strollers are much more stable and less likely to tip.

Four-wheel strollers are typically cheaper than three-wheelers. They will also fit into your car more easily. And you’ll find that extra features such as cup holders, storage baskets, and canopy extensions are more likely to be included with four-wheelers than three-wheelers.

You can still exercise with a four-wheel stroller, but the turning circle is generally wider than that of a three-wheeler, which can be tricky when maneuvering through a tight space or in a crowd.

That said, some four-wheel strollers offer you the same advantages as a three-wheeler by having the two front wheels that are set close together, like the Baby Jogger Anniversary City Stroller for example. With this style of stroller, you get the maneuverability of a three-wheeler with the stability of a four-wheeler, so it’s a win-win.

The style of stroller that you choose will be greatly influenced by your lifestyle and on where you intend to use the stroller.

If you want a smooth, stable ride for your child and you only intend to use the stroller for walks around your neighborhood or on trips to the mall, a four-wheel, regular stroller or umbrella stroller could be the right choice for you. However, if you plan on taking your youngster for some off-road fun on the beach, in the snow, or along your local nature trail, a three-wheel jogger or all-terrain model might fit the bill best.